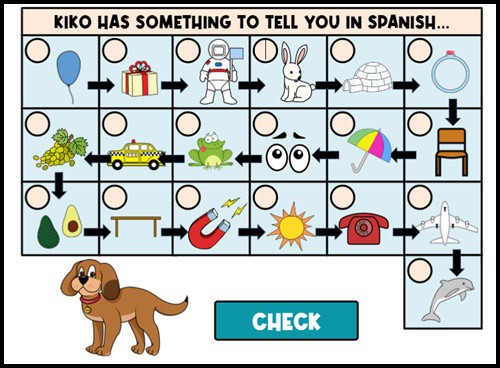 In this Spanish Alphabet Game, the adorable dog Kiko has a message for you formed with 19 letters of the Spanish alphabet. Since Kiko is a very playful dog, he has hidden his message behind some pictures. In order to decipher this message you must look at the picture in each box and think what is the name of the object, animal or person that appears in the picture. Once you know the name, write the initial letter of that noun in the circle.

When you have letters in all the circles, see if following the direction of the arrows all these letters form a sentence with sense. If you think they do, click the “Check” button to verify it. If it is not correct, you can change some letters and try again.

This message does not contain accents. And it doesn’t matter if you use uppercase or lowercase letters.