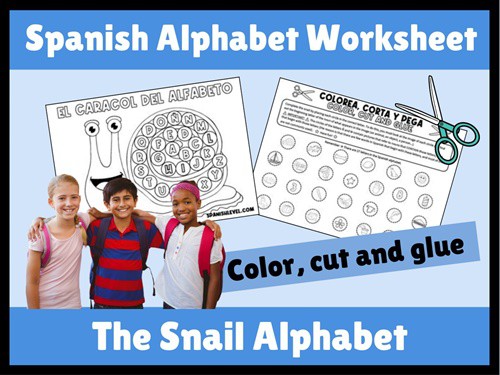 With this Spanish Alphabet Worksheet called “The Snail Alphabet” (El caracol del alfabeto) you can practice the Spanish alphabet and basic vocabulary in an easy and fun way! This worksheet is very similar to the online game of the Snake Alphabet. You have to complete the snail by placing each circle in the correct letter. To do this, you must look at the image of each circle and find out the beginning letter of the noun of what appears in the image (an animal, an object, a person…).
⚠️ Important! The circles of the letters Ñ and W contain pictures that refer to nouns that contain those letters, NOT that begin with those letters (since there are few words in Spanish that begin with these letters, and most of these are not commonly used).

You can use this worksheet by yourself, use it for your children, in a class with your students if you are a teacher, etc. It is not only for kids, it is also for adults who want to practice Spanish in a relaxed way (and because we all have a child inside of us!).